Based in Saskatoon, Saskatchewan, I stumbled upon Rampage Coffee through Instagram, and I’m very glad I did! They roast some really good coffee. They also have really fun branding. I purchased the sampler bundle (which you can get your hands on here) which has their three roasts: RIOT, which is a medium roast; CODE BLK, which is a medium roast; and C-4, a “smooth extreme caffeine blend”. It’s a great way to try a variety of coffee on the cheap, I would highly recommend!

RIOT Blend
This was the first blend I tried out of the bunch. It was quite a mellow coffee, but it did have an active flavour profile consisting of mainly fruity notes. Now, this is not a blend that I would normally go for, but hey, this bundle is all about trying new things. Overall, it was quite a nice blend that did grow on me, and I was quite sad when it was gone. However, I did have two more packs to go, so it wasn’t the end of the world (I guess).
Overall: 3.5/5

CODE BLK Blend
Now let me start by saying that I am #TeamCODEBLK all the way! This was my favourite coffee in the bundle. There was a certain boldness to it, which one would expect from a dark roast but instead of overpowering the tasting notes, it added a sense of richness to it. It had more of a chocolate flavour profile, something that is much more my speed. It had a very smooth finish as well!
Overall: 4.5/5

C-4 Blend
Can I be real with you guys for a second? I was honestly a little scared to try this blend. I mean, “extreme caffeine blend”, can you blame me? Plus look at that packaging! Anyway, I’m glad I did, because it was a very, very solid roast. I was pleasantly surprised that it wasn’t overwhelmingly dark (a fine line that Rampage walks incredibly well). It was fairly similar to the CODE BLK in terms of boldness and flavour, which probably explains why I liked it. Overall, this was a solid way to end the sampler bundle.
Overall: 4/5

To conclude, Dustin & Lauren know how to make great coffee. As a bonus, they are really fun on Instagram and are very responsive to their customers. I can’t recommend them enough. I highly encourage you to check them out. 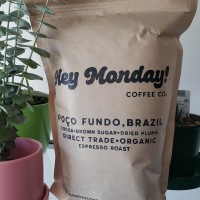